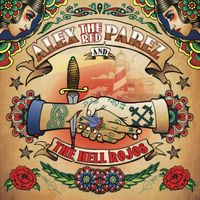 From the recording Alex The Red Parez and The Hell Rojos

from Alex The Red Parez and The Hell Rojos,

Rollin' through the rapids boomin'
You will find there cool, blue waves
And in the dark desert you will know its sweet air that moves over you
And I'll be there, flowin' inside of you
Warmly passin' through your arms and legs, deep within.

Water is windin' 'round all the river's bends
Its sound can be heard among wind and earth
Movin' through you
Calm, flowin' slow, slidin' Heavenly upon you.

I can still feel you with me
But now that you're gone the desolation has its hold on me
So I'll be here, alone and tired from fear
But tranquil and sleepin' easily with the stream.

Powerful, strong as the deep flowin' river
It's been so long that I've burned and lost
All memory of anything
Seeking the truth, flowin' through.